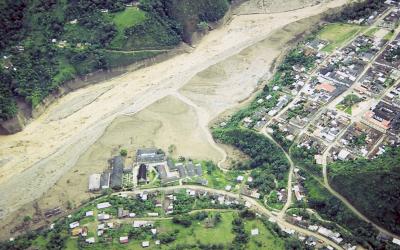 Town of Belalcázar, Colombia, the largest community hit by an earthquake induced lahar in 1994. Flow arrived from upper right and only riverside structures were destroyed.

Village of Belalcázar along the Páez River in Colombia. Photograph taken in 2006 - note river bank vegetation and soccer pitch is restored in 12 years after 1994 lahar. 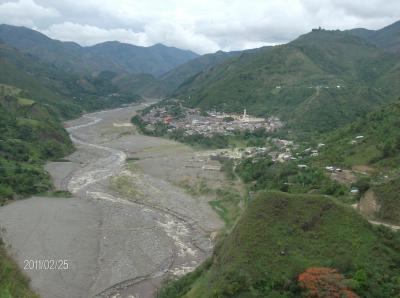 Village of Belacázar, adjacent to the river Paez. Photo taken four years after the 2008 lahar, but the trace of the deposit and destruction is still visible.

Nevado del Huila is a large snow-and-ice-clad volcano capable of generating large, exceedingly dangerous, debris flows (lahars) when it erupts. In 1994 the Huila region was the site of a M 6.4 tectonic earthquake that induced lahars and killed about 1,000 people. These fatalities combined with the 1985 eruption of Nevado Del Ruiz and lahar disaster in the town of Armero, greatly enhanced the awareness of lahar hazards in the country.

On November 14, 2008 a VDAP scientist collaborating with Colombian Geological Survey (INGEOMINAS) noticed an interval of repetitive "drumbeat" earthquakes on seismic data. On November 19, VDAP and INGEOMINAS forecast an eruption for November 20 based on the earthquake activity.

An eruption was detected at 9:45PM on November 20 and INGEOMINAS called for evacuations. An ash column rose to 50,000 feet and by 9:53PM the lahar was detected on a monitoring station. By 10:05PM, the village of Belalcázar was completely evacuated – a lahar arrived at 10:20 pm and inundated part of the village.

Prior on-site and remote support from VDAP allowed the Colombian Geological Survey to successfully avert a tragedy through timely warnings, an aggressive education program, and effective communications. The local people were aware that the volcano posed a threat and were prepared to act; when the warning came, 12,000 people evacuated the town at night, and there were no fatalities in Belalcázar.

Panoramic image of Belacázar Village eight years after the 2008 lahar innundation. Lahar deposits in the foreground of the town are now soccer fields and a dirt bike track.