Knowledge Sharing: What Do Vog and Wildfire Smoke Plumes Have in Common? 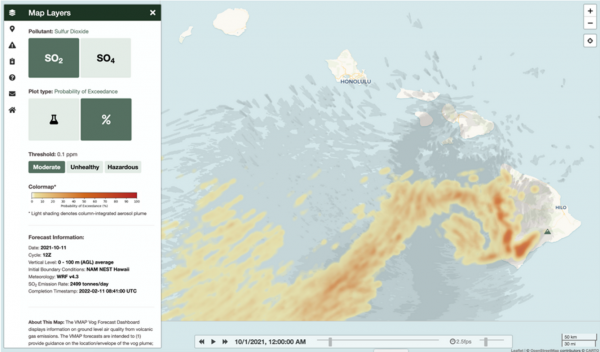 
Volcanic eruptions and wildfires are key drivers of extreme air quality hazard. How can we bridge scientific knowledge about these phenomena to improve local volcanic air pollution (vog) forecasts in Hawai‘i?

Since 2010, University of Hawai‘i at Mānoa researchers at the Vog Measurement and Prediction Program (VMAP) have been studying the dispersion of vog in Hawai‘i. The central goal of the effort has been to provide the public and emergency responders with accurate and timely forecasts that would help limit vog exposure for those in affected areas and communities.

Although VMAP's model was unique in its effort to provide operational forecasts for volcanic pollution, it paralleled another emerging global air quality concern: wildfire smoke.

While there are drastic differences between the chemistry of smoke and vog, the movement of both types of plumes is controlled by similar physical mechanisms. Intense heating at the surface generates vertical updrafts. As the hot air rises, it moves pollutants, such as volcanic gases, ash, or wildfire smoke from their source to the upper levels of the atmosphere. Turbulence causes the plume to widen and cool as it mixes with clean ambient air through a process called entrainment. In addition, the plume cools through expansion.

Eventually, the plume reaches its level of neutral buoyancy, or 'injection height,' from where its movement in the atmosphere is largely controlled by the ambient horizontal winds.

During extreme wildfires and volcanic eruptions, the plume cooling process can also lead to the formation of flammagenitus clouds. Commonly known as 'pyrocumulus,' these clouds originate above a strong, localized heat source—such as the Ahu‘ailā‘au (fissure 8) lava fountain in Kīlauea's 2018 lower East Rift Zone eruption—and can produce intense turbulence, surface wind gusts, lightning and rain. The formation of pyrocumulus can generate further lift, pulling pollutants higher into the atmosphere.

As a result of all these complex dynamic mechanisms, determining the plume injection height has been a shared challenge for vog and smoke air-quality modelers. It requires detailed knowledge of many aspects of both the heat source and the ambient atmosphere. Unfortunately, it is often impossible to obtain such observations under natural disaster conditions.

Meanwhile, small errors in estimating the plume injection height can lead to large errors in downwind predictions of pollutant concentrations. This is because horizontal winds at various elevations in the atmosphere often do not blow in the same direction. Due to this wind shear, miscalculating plume injection height can cause an air quality model to transport the plume in the wrong direction, leading to a poor forecast.

Hence, a key question for both vog and smoke modelers is: how high up will a given plume rise?

Powerful eruptions—like those of Mount Pinatubo in 1991 and Hunga Tonga-Hunga Ha'apai earlier in 2022—can send plumes of volcanic gases and ash deep into the stratosphere, resulting in long-range pollution transport and even generating climate-cooling effects. Until recently, few wildfires were powerful enough to do this. Yet due to human-driven climate change, there has been a dramatic increase in high-intensity 'mega-fires' around the world over the last decade. The power and scale of impact of these events are comparable to that of volcanic eruptions. In fact, photos of vog and smoke plumes can sometimes be hard to distinguish.

There is a silver lining to this growing overlap between volcanic eruptions and wildfires. It allows scientists to transfer knowledge about the physics and dynamics of plumes across the two research domains.

Owing to the recent rapid development of new algorithms for wildfire smoke models, VMAP scientists have been able to incorporate a new dynamic plume-rise approach in their vog forecasts. This resulted in more accurate air quality predictions for the State of Hawaii. Through knowledge sharing, these improvements will in turn benefit the broader air quality modelling community and the public.

Over the past week, lava has continued to erupt from the western vent within Halema‘uma‘u crater. All lava is confined within Halema‘uma‘u crater in Hawai‘i Volcanoes National Park. Sulfur dioxide emission rates remain elevated and were last measured at approximately 4,300 tonnes per day (t/d) on April 27, 2022. Seismicity is elevated but stable, with few earthquakes and ongoing volcanic tremor. Summit tiltmeters show one minor deflation and inflation trend over the past week. For more information on the current eruption of Kīlauea, see https://www.usgs.gov/volcanoes/kilauea/recent-eruption.

Mauna Loa is not erupting and remains at Volcano Alert Level ADVISORY. This alert level does not mean that an eruption is imminent or that progression to an eruption from the current level of unrest is certain. Mauna Loa updates are issued weekly.

This past week, about 55 small-magnitude earthquakes were recorded below the summit and upper elevation flanks of Mauna Loa—the majority of these occurred at shallow depths less than 15 kilometers (9 miles) below sea level. Global Positioning System (GPS) measurements show low rates of ground deformation over the past week. Gas concentrations and fumarole temperatures at both the summit and at Sulphur Cone on the Southwest Rift Zone have remained stable over the past week. Webcams show no changes to the landscape. For more information on current monitoring of Mauna Loa, see: https://www.usgs.gov/volcanoes/mauna-loa/monitoring.

No felt earthquakes were reported in the Hawaiian Islands during the past week.