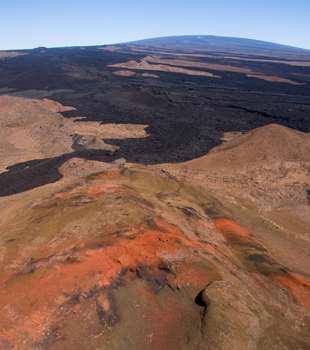 Rising gradually to more than 4 km (13,100 ft) above sea level, Mauna Loa is the largest active volcano on our planet. Its long submarine flanks descend to the sea floor an additional 5 km (16,400 ft), and the sea floor in turn is depressed by Mauna Loa's great mass another 8 km (26,200 ft). This makes the volcano's summit about 17 km (55,700 ft) above its base! The enormous volcano covers half of the Island of Hawai‘i and by itself amounts to about 85 percent of the area of all the other Hawaiian Islands combined.

The Hawaiian name "Mauna Loa" means "Long Mountain." This name is apt, for the subaerial part of Mauna Loa extends for about 120 km (74 mi) from the southern tip of the island to the summit caldera and then east-northeast to the coastline near Hilo.

Mauna Loa is among Earth's most active volcanoes, having erupted 33 times since its first well-documented historical eruption in 1843. It has produced large, voluminous flows of basalt that have reached the ocean eight times since 1868. It last erupted in 1984, when a lava flow came within 7.2 km (4.5 mi) of Hilo, the largest population center on the island. Mauna Loa is certain to erupt again, and with such a propensity to produce large flows, we carefully monitor the volcano for signs of unrest.