Yellowstone Caldera Chronicles is a weekly column written by scientists and collaborators of the Yellowstone Volcano Observatory. This week's contribution is from geologist Pat Shanks, Scientist Emeritus with the U.S. Geological Survey.

Exploration and sampling of Yellowstone's thermal areas indicates that Yellowstone's hot springs often have surprisingly complex plumbing systems. Because of this, it is not uncommon to find hot spring pools and steam vents (also called fumaroles or vapor-dominated vents) located in close proximity—or even occupying the same space! 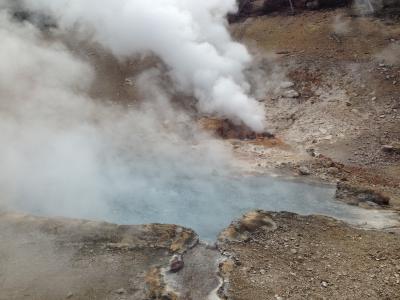 Beryl Spring's strongly boiling blue pool is about 8 m (25 ft) wide and contains high-chloride liquid water with a near-neutral pH. Immediately behind the pool is a loud, hissing fumarole producing a white cloud of steam. USGS Photo by Pat Shanks, 2002.

Beryl Spring, in the Gibbon River valley south of Artist's Paintpots, is a good example, with a strongly and constantly boiling hot-spring pool with a powerful fumarole just behind the pool. Beryl Spring waters have temperatures ranging from 90.5-94.2? (92? is boiling at Yellowstone elevations), near neutral pH, and relatively high dissolved chloride content (Cl). The fumarole, on the other hand, contains 98.9% steam; the remaining gases are mostly CO2 with minor H2S.

Why do two completely different types of vents occur so close together? The answer relates to the hot spring fluids that have circulated deeply in the hot rocks of the Yellowstone subsurface and become heated and therefore buoyant. As the hot fluids ascend and pressure decreases in the near-surface environment, boiling occurs and steam plus gases separate from the fluid. Steam may remain entrained in the ascending fluid as bubbles, or it may find a separate pathway to the surface through cracks or other conduits. At Beryl Spring, the fumarole has found a separate conduit that vents close to the main hot spring. But steam vents that have found other pathways dot the hillside above Beryl Spring and follow a fault zone to the hilltop Monument Geyser Basin, which is about 0.8 km (0.5 miles) from Beryl. 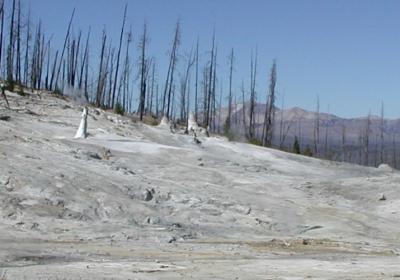 View of Monument Geyser Basin looking NE. Dozens of steam vents occur in this area and form fumaroles, frying pans, mud pots, and in some cases have built silica-rich "monuments" (which lend the basin its name). This is an isolated area dominated by steam vents. USGS photo by Pat Shanks, 2002.

Monument Geyser Basin is an area of dozens of steam vents with very low Cl and acidic pHs between 1.0 and 2.5. Sulfur gases, such as H2S, in steam vents generally create acid conditions because reaction with oxygen produces sulfuric acid. This results in strongly acid pHs in the 1-4 range. No high-Cl vents occur in Monument Geyser Basin because of its elevation about 250 m (800 ft) above the water table at the Gibbon River, so only steam rises to this level. In some cases, steam condenses to form acidic pools that may be clear "frying pans" (shallow pools with steam bubbling through that resemble hot grease in a skillet) or, more often, "mud pots" with clay minerals from acid-rock alteration.

So, steam vents may be closely associated with hot spring pools or may vent separately, but the steam and fluids often have a common source.

In some cases, steam vents occur within hot spring pools, resulting in fluid mixing that has profound effects on fluid compositions and especially pH. 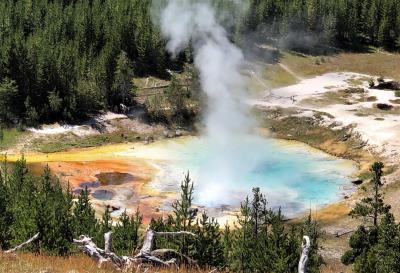 Imperial Geyser looking south. This hot spring pool is about 30 m (about 100 ft) across and contains alkaline-Cl waters with a steam vent in the pool and mudpots outside the pool area (in the upper right part of this photo). USGS Photo by Pat Shanks, 2019.

Imperial Geyser, near Midway Geyser Basin, is a clear blue pool with a steam vent right in its edge. Surrounding the pool is an active mudpot area to the west. The quiet hot waters (about 85?) in most of the pool have high Cl and alkaline pHs of 9 to 10, but pH measurements taken near the steam vent give acidic values of 3 to 4, similar to the mudpot fluids outside the pool. In this case, the geyser erupts frequently up to about 10 m (30 ft) high due to the steam vent that entrains water from the pool. The water in the pool has high Cl, about 200 mg/L, but is not as high as some alkaline-Cl pools. So this is a case where steam and gases have separated from the liquid water on ascent to the surface and the steam finds multiple pathways to the surface, including venting in the mudpot area and in the pool itself. 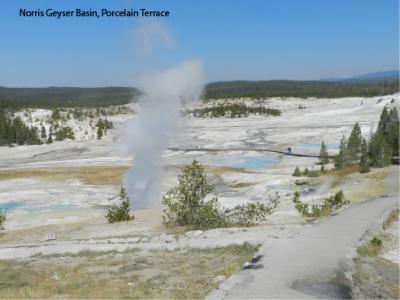 Porcelain Terrace area of Norris Geyser Basin. Note steam vents in the foreground and many milky-blue silica depositing pools in the distance. The broad area of white deposits is silica sinter deposited in this case from acidic Cl-rich hot spring waters. USGS photo by Pat Shanks, 2016.

A final and broad scale example where the interplay and interaction between acidic steam vents and alkaline chloride fluids in hot springs is at Norris Geyser Basin. Norris is one of the most active and dynamic thermal basins in Yellowstone, hosting the world's tallest geyser (Steamboat) and the world's largest acidic geyser (Echinus). Perhaps the most unusual geochemical feature of Norris is the presence of many hot springs with high Cl and low pH—this is sort of the opposite of what would be expected, since high Cl is usually associated with neutral or alkaline pH, not acidic pH. Many hot springs at Norris are a result of entrainment of acid steam into Cl-rich fluids in the subsurface, especially in areas like Porcelain Terrace, where there are numerous fumaroles, perpetual spouters, and springs with acidic pH between 2.6 and 6.1. The acidic pHs are related to acid-forming H2S reaction with oxygen producing relatively high SO4 (sulfate) content in the resultant hot springs.

Even though the hot gases and waters expelled at the surface in Yellowstone's hydrothermal areas may share common sources, the way they rise to the surface can result in very different chemistry and manifestations. Unraveling their histories and can be especially complicated when the fluids recombine at the surface, but chemical analyses tell the tale!