Earthquakes in and around Yellowstone: How often do they occur?

In a previous YCC article, we discussed the 1959 M7.3 Hebgen Lake earthquake that occurred just west of Yellowstone National Park. Because of this earthquake and the thousands of others that we record each year, we know that the area is seismically active and capable of producing large, damaging earthquakes. In fact, because of their rate of occurrence, large earthquakes represent one of the greatest geological hazards in the area, much more so than a volcanic eruption. The U.S. Geological Survey produces seismic hazard maps for the United States and the 2018 nationwide long-term assessment shows that the Yellowstone region has some of the highest seismic hazard values in the Intermountain West. 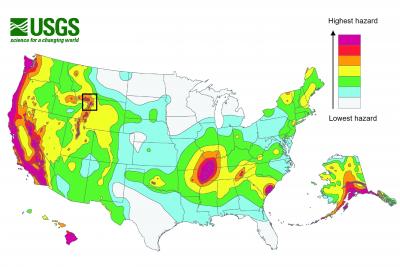 Earthquake hazard map showing peak ground accelerations having a 2 percent probability of being exceeded in 50 years, for a firm rock site. Black box outlines Yellowstone region. The map is based on the most recent USGS models for the conterminous U.S. (2018), Hawaii (1998), and Alaska (2007). The models are based on seismicity and fault-slip rates, and take into account the frequency of earthquakes of various magnitudes. Locally, the hazard may be greater than shown, because site geology may amplify ground motions.

So how frequently do earthquakes occur in Yellowstone? Often, we say that over the long term Yellowstone averages about 1,500–2,000 earthquakes per year. Let's look at the last decade (2010–2019) to better understand this average. During this 3,652-day period, the University of Utah Seismograph Stations (UUSS) located 17,243 earthquakes in the Yellowstone region. This gives an average daily number of earthquakes of 4.7, or one earthquake every ~5.1 hours (of course, about half of these events occur in swarms, so are not evenly distributed over time). As a comparison, over the last decade UUSS located 14,080 earthquakes in the Utah region for an average of ~3.9 earthquakes per day or an earthquake every ~6.2 hours. The Intermountain West is a seismically active place indeed!

One caveat in these numbers is that we are not locating every earthquake that happens in Yellowstone—or anywhere, for that matter. The ability to record and locate an earthquake is directly related to the number and distribution of seismometers in the region—the seismic network. When an earthquake happens, seismic energy propagates out in all directions, but that energy lessens as it travels away from the source. To get a location and an origin time for an earthquake, you need to record that earthquake on at least 4 stations. As a result, it is hard to record and locate very small earthquakes if you don't have a dense seismic array because you can't adequately record small earthquakes on enough stations—the energy from such small quakes dissipates too rapidly to be recorded across the seismic network. 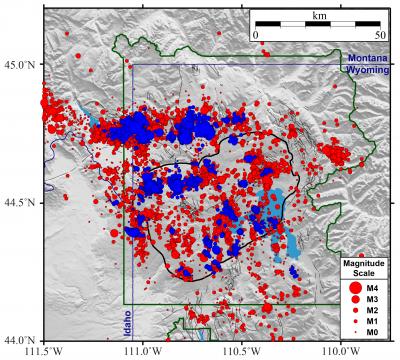 Yellowstone earthquakes that occurred during 2010-2019. Blue symbols indicate events that occurred as part of swarms, while red indicates non-swarm seismicity. Map courtesy of the University of Utah Seismograph Stations.

In Yellowstone, we have a magnitude of completeness of ~1.5, meaning that we are reliably recording and locating all earthquakes of M1.5 and larger. Anything smaller than M1.5 might be missed depending on the location. Some areas in Yellowstone have more stations, so we are able to record smaller events, but in other areas the network is less dense. As a result, there are probably earthquakes happening all the time, but they are much too small for us to locate and definitely too small for us to feel (generally, earthquakes smaller than M3 are not felt).

While most earthquakes in the Yellowstone region are in the M0–2 range, there are always a few that are M3 or higher and that are felt by people in the area. The largest quake of the past several years was a M4.8 that occurred near Norris Geyser Basin in March 2014 and that was felt widely across the area. Over the past decade, there were 54 felt events in the Yellowstone region giving an average of ~5 felt earthquakes every year. However, of the 54 felt events, 38 were part of either the 2010 Madison Plateau swarm or the 2017-2018 Maple Creek swarm. So while there is always a chance that visitors to Yellowstone will feel an earthquake, the chances increase if there is a significant swarm occurring! 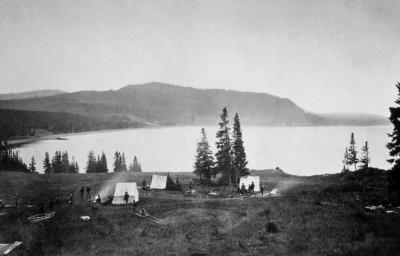 In fact, some of the first "tourists" to Yellowstone felt earthquakes. In 1871, Ferdinand V. Hayden led a federally funded expedition to the Yellowstone region to explore the many wonders in the area. While camping on the north shore of Yellowstone Lake (near current Steamboat Point), they recorded the following passage:

"This morning [August 20] about 1 o'clock we had quite an earthquake. The first schock [sic] lasted about 20 seconds and was followed by five or six shorter ones. Duncan, who was on guard, says that the trees were shaken and that the horses that were lying on the ground sprang to their feet ... We had three shocks during the morning."

Because of the earthquakes that they felt in this area, they named this camp "Earthquake Camp". These earthquakes were probably part of a swarm.

So, the next time you visit Yellowstone, we can virtually guarantee that there will be earthquakes occurring while you are there. The odds are that you won't feel any of these quakes, but there's always a chance that a felt event may occur, and an outside chance that the event could be strong, like those that have struck the Yellowstone area in the past. Remember—Yellowstone is earthquake country, and people should be prepared for the consequences of damaging events.

For the latest information on earthquakes in the Yellowstone region, visit the UUSS website at https://quake.utah.edu.