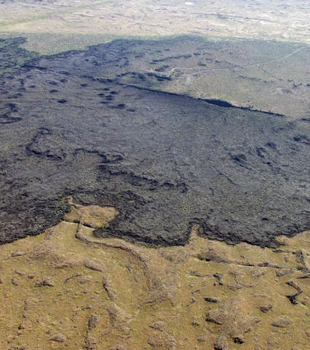 Summary
Quick Facts
The Wapi lava field, southeast of the Craters of the Moon lava field, covers about 325 km2 (125 mi2), and consists of a low shield volcano formed during an eruption about 2,270 years ago that produced about 6 km3 (1.4 mi3) of fluid pahoehoe lava flows. The small King's Bowl lava field immediately to the north was also formed at about the same time (2,222 years ago) along a central eruptive fissure flanked by two parallel non-eruptive fissures. This eruption produced a phreatic explosion that created Kings Bowl, an 80-m-long, 30-m-deep (260-by-100 ft) explosion crater.

Eruptions of the Wapi lava field occurred at approximately the same time as the last eruptive period of the Craters of the Moon lava field. The vent area of the Wapi field lies along the Great Rift volcanic rift zone and consists of five major and a half dozen minor vents covering an area of 0.5 km2 (0.2 mi2). The largest of the vents contains several pit craters that truncate lava lakes that filled the crater. Pillar Butte, a mass of layered lava flows and agglutinates, forms the high point of the lava shield. The Split Butte maar to the west is partially surrounded by flows of the Wapi lava field.

There is a low probability of future eruptions from the precise area enclosed by the Wapi lava field. Since it was a one-time (monogenetic) basaltic shield eruption, eruptions will probably not recur at the same site. An eruption hazard exists along the entire Great Rift, particularly in its northern reaches in the Craters of the Moon lava field. In the event of a future eruption at the south end of the rift near the Wapi field, agricultural infrastructure is at risk, but very little, if any, housing would be impacted.
Location: Idaho, Snake River Plain
Latitude: 42.88° N
Longitude: 113.22° W
Elevation: 1,604 (m) 5,262 (f)
Volcano type: Shield volcano
Composition: Basalt
Most recent eruption: 2,270 years ago
Threat Potential: Low/Very Low *
Contact Us | Accessibility | FOIA | Privacy | Policies and Notices | U.S. Department of the Interior | U.S. Geological Survey | USAGov Page modified: 2015-02-02 09:21:29