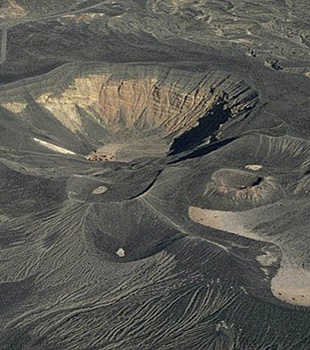 Ubehebe (pronounced you-bee-HEE-bee) Craters, located about 225 km (140 mi) northwest of Las Vegas, NV, and 88 km (55 mi) southeast of Bishop, CA, in Death Valley National Park, consists of thirteen overlapping volcanic craters. The largest crater is about 800 m (0.5 mi) wide and 250 m (800 ft) deep. The craters formed during a series of explosions set off as molten rock (basaltic magma) rising toward the Earth's surface flashed groundwater to steam (phreatic eruption). The explosive magma-water interaction blasted pulverized rock high into the air so that the ejected deposits are comprised of both basaltic lava (about a third) and fragments of sandstone and gravel from the preexisting landscape (about two thirds). Debris from the explosions blankets an area of about 40 km2 (15 mi2). Research by CalVO scientists suggests the set of crater-forming blasts may have taken place in response to a single batch of rising magma. The eruptive episode probably lasted a few days or weeks and took place about 2100 years ago.

The California Volcano Observatory has only one seismometer in the vicinity of Ubehebe Craters, which, along with the region-wide network of USGS seismometers, will alert us to any future volcanic unrest. Presently, Ubehebe Craters is ranked as Moderate Threat volcano in the USGS volcanic threat assessment (USGS Open-File Report 2005-1164, 2005). Threat rankings of all US volcanoes are periodically reviewed and may be revised as new research is published.