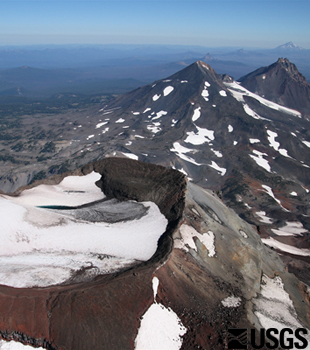 Summary
Quick Facts
"For magnificence of glacial scenery, for wealth of recent lavas, and for graphic examples of dissected volcanoes, no part of this range surpasses the area embracing the Sisters and McKenzie Pass." - Volcanologist Howel Williams, 1944

The three aligned stratovolcanoes of North, Middle, and South Sister are closely spaced, but they display very little family resemblance. North Sister is solely composed of basalt to andesite and is at least 120,000 years old. Middle Sister was built between 40 and 14 ka of magma ranging from basalt to dacite, with minor high-silica rhyolite. South Sister, composed of andesite to rhyolite, is the most silicic of all the cones and was constructed between 50 and 2 ka. The most recent eruptions were of rhyolite near South Sister, about 2,000 years ago. Scientific and public interest in the Three Sisters volcanic cluster was heightened in 2001 when scientists recognized that a phase of uplift had started in 1997 within a broad area about 6 km west of South Sister.

The Three Sisters lie within a broad area of densely spaced volcanic vents that, in the Cascades, is duplicated only in southern Washington and Northern California. The Sisters reach of the Cascade arc contains at least 466 volcanoes that erupted within the past one million years, and most are small single-eruption volcanic vents, though there are a few are low shields and stratocones such as Broken Top.