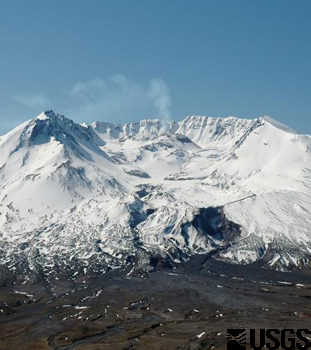 Prior to 1980, Mount St. Helens had the shape of a conical, youthful volcano sometimes referred to as the Mount Fuji of America. During the 1980 eruption the upper 400 m (1,300 ft) of the summit was removed by a huge debris avalanche, leaving a 2 x 3.5 km (1.2 x 2.2 mi) horseshoe-shaped crater now partially filled by a lava dome and a glacier. It is primarily an explosive dacite volcano with a complex magmatic system.

Mount St. Helens was formed during four eruptive stages beginning about 275,000 years ago and has been the most active volcano in the Cascade Range during the Holocene. Prior to about 12,800 years ago, tephra, lava domes, and pyroclastic flows were erupted, forming the older St. Helens edifice, but a few lava flows extended beyond the base of the volcano. The bulk of the modern edifice (above the 1980 crater floor) was constructed during the last 3,000 years, when the volcano erupted a wide variety of products from summit and flank vents. Historical eruptions in the 19th century originated from the Goat Rocks area on the north flank, and were witnessed by early settlers. New unpublished data on the timing for Mount St. Helens eruptive activity have been analyzed, which improves some of the eruption dates cited in published literature. This website contains the most up to date information.