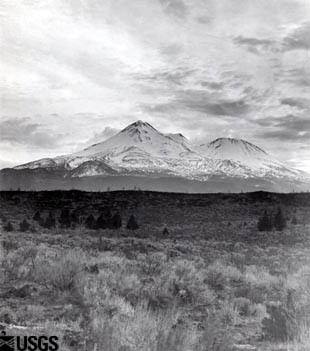 Summary
Quick Facts
Mt. Shasta is a majestic, steep-sided stratovolcano located about 97 km (60 mi) north of Redding along the I-5 corridor in Northern California. It is the most voluminous of all the Cascade Range volcanoes, and the towns of Weed, Mt Shasta City, and McCloud lie in the shadow of its 4,317 m (14,163 ft) high snow- and ice-clad edifice, which also holds the headwaters of the Upper Sacramento River. Mount Shasta began forming on the remnants of an older, similar volcano that collapsed 300,000 to 500,000 years ago. The collapse spawned one of the largest landslides known on Earth, covering more than 440 km2 (170 mi2) of Shasta Valley to the northeast. Activity over the last 300,000 years includes long intervals of quiet interrupted by shorter spans of frequent eruptions. Eruptions at about 11,000 years ago built Black Butte and Shastina on the western flanks of Mount Shasta. In the last few millennia, smaller eruptions have broken out at the volcano's summit and from vents on its upper east flank. USGS scientists are working on constraining the age of the most recent eruption, but the youngest, well-documented eruption was about 3,000 years ago. Hot springs and volcanic gases seep from the summit indicating a relatively young and still-hot system. Non-volcanic shedding of young volcanic rock and ash from Mount Shasta's steep slopes occurs during heavy rainfall or glacial floods. In the last 1,000 years, more than 70 mudflows have inundated stream channels. The record of eruptions over the last 10,000 years suggests that, on average, at least one eruption occurs every 800 to 600 years at Mt Shasta. USGS and UNAVCO seismic and geodetic networks provide real-time volcano monitoring data. Earthquake activity has been low for the last few decades and ground deformation is negligible.
Location: California, Siskiyou County
Latitude: 41.409° N
Longitude: 122.193° W
Elevation: 4,317 (m) 14,163 (f)
Volcano type: Stratovolcano
Composition: andesite, dacite
Most recent eruption: ~3,000 years ago
Nearby towns: Weed, Mount Shasta, Edgewood, Dunsmuir
Threat Potential: Very High *
Contact Us | Accessibility | FOIA | Privacy | Policies and Notices | U.S. Department of the Interior | U.S. Geological Survey | USAGov Page modified: 2020-02-04 14:14:02