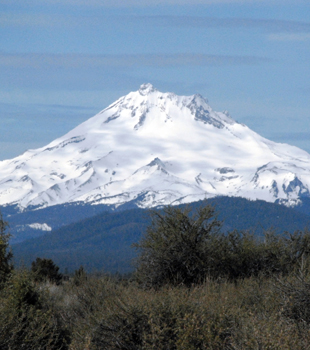 Mount Jefferson (3,199 m, 10,495 ft) is the second tallest mountain in Oregon (after Mount Hood) and the only major volcanic center in the U.S. portion of the Cascade Range that hasn't erupted in the past 10,000 years. The andesite-dacite stratovolcano was built in several stages between about 280 ka and 15 ka, with much of the edifice constructed in the past 100,000 years. The youngest additions to the main cone occurred in the interval from 30 to 20 ka—during the last ice age—and many of these flows show evidence of volcano-ice interaction. Remnants of andesite-dacite lavas at the margins of the volcano suggest that the Mount Jefferson area has been the site of predominantly andesite to dacite eruptions for at least the past 700,000 years.

Within about 15 km (9 mi) of the main cone, andesite and dacite have also erupted from at least 35 small vents, building many domes, small shields and lava aprons. The youngest lava flows in the area, though not associated with Mount Jefferson proper, are basaltic lava flows from four monogenetic vents (including Forked Butte) between 6 and 12 km (4 and 8 mi) south of Mount Jefferson. At least two of the flows postdate the 7.7 ka eruption of Mount Mazama. This relatively-young activity suggests that the area surrounding Mount Jefferson remains potentially active.