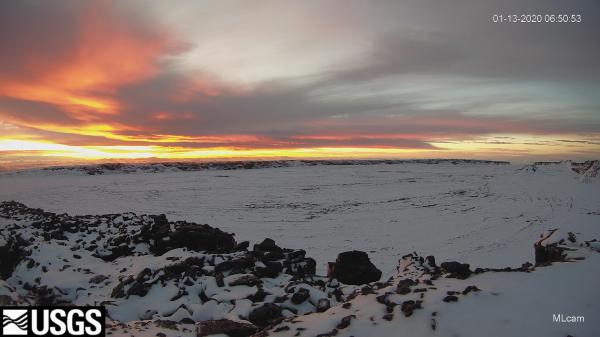 Snow at the summit of Mauna Loa has been visible over the past few days in HVO’s MLcam, a webcam on the northeastern rim of Moku‘āweoweo, the volcano's summit caldera. This animated GIF file shows a sequence of MLcam images from January 13 between 5:00 a.m. and 2:30 p.m. According to the Hawai‘i Volcanoes National Park website, winter weather hazards currently exist at the summit of Mauna Loa. Prospective backpackers for the area must consult the Park's Backcountry Office.
December 18, 2019
Clear Views of Mauna Loa on Kīlauea summit overflight 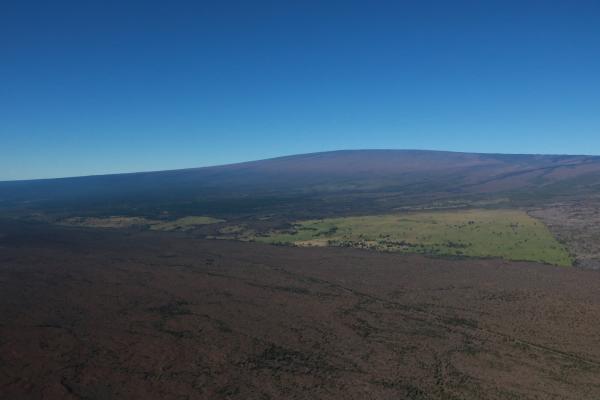 During an overflight of Kīlauea’s summit on December 18, there were clear and cloud-less views of Mauna Loa Volcano. Highway 11, traversing both Kīlauea and Mauna Loa lava flows, is visible in the lower right corner of the image which shows a view from high above Kīlauea’s summit looking west. Mauna Loa is not erupting. Its USGS Volcano Alert level remains at ADVISORY. This alert level reflects rates of seismicity and deformation that are above the long-term background. It does not mean that an eruption is imminent or that progression to an eruption is certain. Mauna Loa updates are issued weekly. For more info on the status of the volcano, please go to: https://volcanoes.usgs.gov/volcanoes/mauna_loa/status.html. USGS photo by K. Mulliken.
November 19, 2019
A dusting of snow on Mauna Loa summit 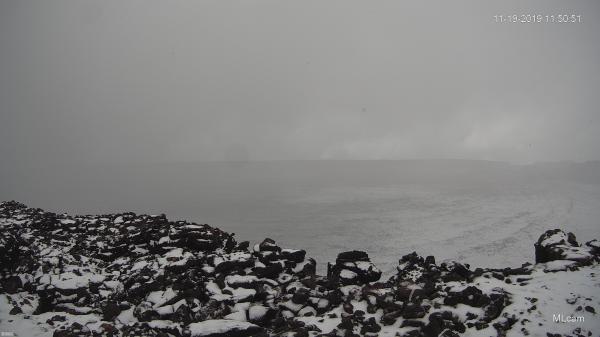 Stormy weather passing through the area today produced a brief snowfall at the summit of Mauna Loa, captured by the HVO webcam. Most of the snow melted within a few hours.
October 20, 2019
Civil Air Patrol flight over Mauna Loa Summit 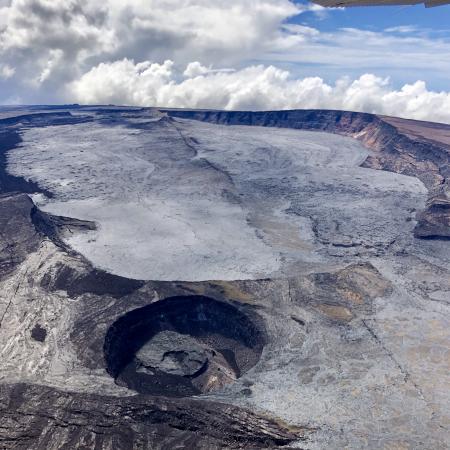 Aerial view of Mauna Loa's summit caldera, Moku‘āweoweo, captured by Civil Air Patrol on Sunday, October 20, 2019. Lua Poholo is the name of the pit crater in the bottom left corner of the image. Cones that formed during the 1940 and 1949 eruptions of Mauna Loa are visible in the background, as well as fissures that extend through the center of the caldera. These fissures formed during the most recent eruption of Mauna Loa, in 1984. 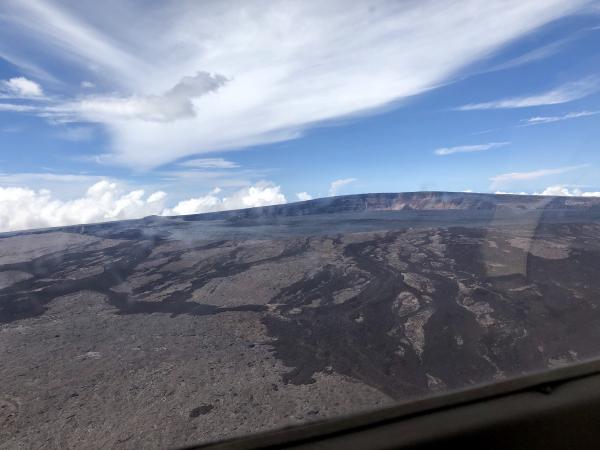 Civil Air Patrol captured this aerial image of Mauna Loa's summit caldera, Moku‘āweoweo, on Sunday, October 20, 2019. The true summit of Mauna Loa is located just to the right of the center of the image, at the highest location above the caldera wall in the background. The cones that formed during the 1940 (right) and 1949 (left) eruptions are visible in the distant left side of the image. Lava flows in the foreground of the image, which flowed in a direction south of the summit of Mauna Loa, were active prior to formation of the summit caldera approximately 1,000 years ago. 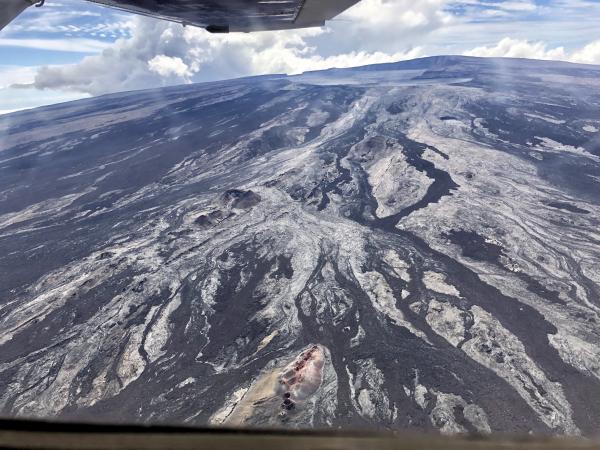 Cones, flows, and fissures mark the uppermost portions of Mauna Loa's northeast rift zone in the foreground of this aerial image taken by Civil Air Patrol on Sunday, October 20, 2019. In the background, Moku‘āweoweo, Mauna Loa's summit caldera, is visible. The highest point on Mauna Loa, the true summit, is in the upper right hand corner of the image.
September 28, 2019
HVO rebuilds and relocates Mauna Loa gas monitoring instruments 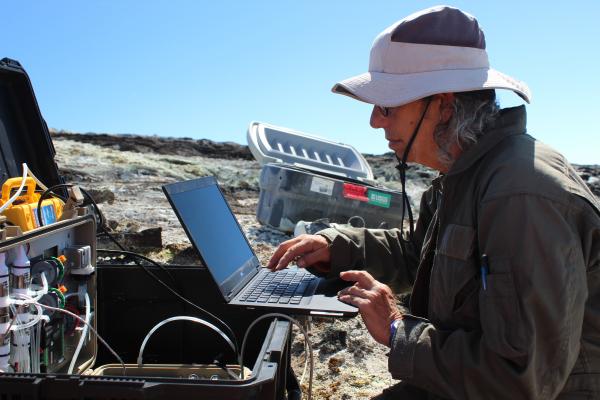 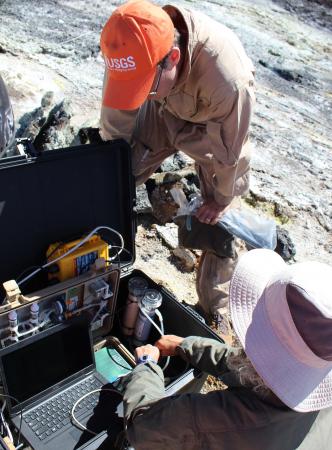 Left: An HVO scientist connects via computer to an upgraded gas sensor station on Mauna Loa. The old housing for the station is visible in the background. USGS photo by P. Nadeau, 09-17-2019. Right: An HVO field engineer and gas geochemist check the wire and tubing connections in the updated gas sensor equipment. USGS photo by P. Nadeau, 09-17-2019. 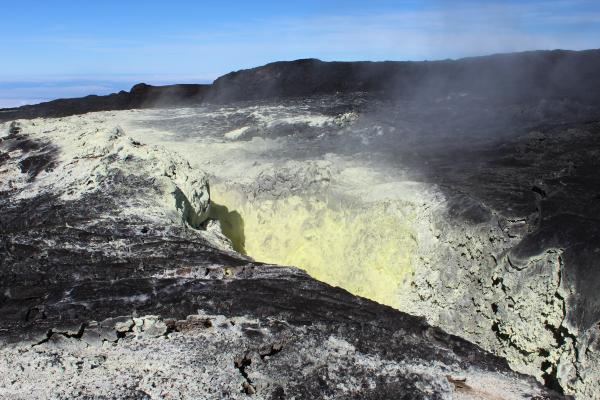 Native sulfur crystals often form through the reaction of sulfur dioxide and hydrogen sulfide gases, both of which are degassing from this old fissure on Mauna Loa, making it an ideal site for volcanic gas monitoring. As a result of the degassing, the fissure is lined with yellow sulfur crystals. USGS photo by P. Nadeau, 09-17-2019.
September 8, 2019
Mauna Loa: Early morning view of Moku‘āweoweo

An early morning view looking north across Moku‘āweoweo, Mauna Loa's summit caldera, from a spot near the summit cabin on the volcano's south caldera rim. Frost covered much of the caldera floor that was still shadowed, and weak steaming issued from the usual areas. Overall, there were no significant changes observed at the summit. The 1940 and 1949 cones are visible in the sunlit area at left, and the gap that connects the caldera to South Pit is visible at the far left. Photos by M. Patrick, 09-08-2019.
July 10, 2019
Routine overflight of Mauna Loa summit 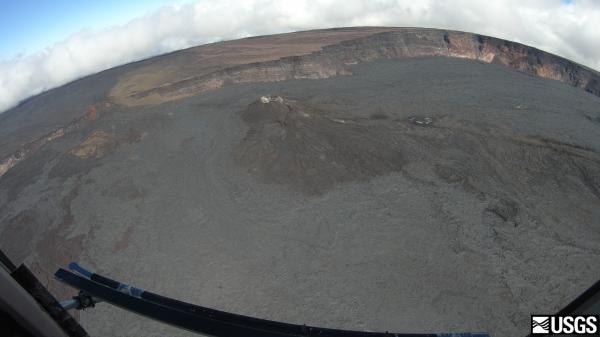 This video shows Moku‘āweoweo, the caldera at the summit of Mauna Loa, during a routine overflight. The flight path goes from northeast to southwest, and begins at North Pit crater before crossing over the main caldera floor. In the southwest portion of the caldera floor, the 1940 and 1949 cones can be seen. The video ends as the helicopter flies over South Pit, at the southwest end of the caldera. The video is shown at 3x speed, and was taken with a very wide-angle lens.
April 29, 2019
Timelapse sequence shows a typical day at Mauna Loa's summit 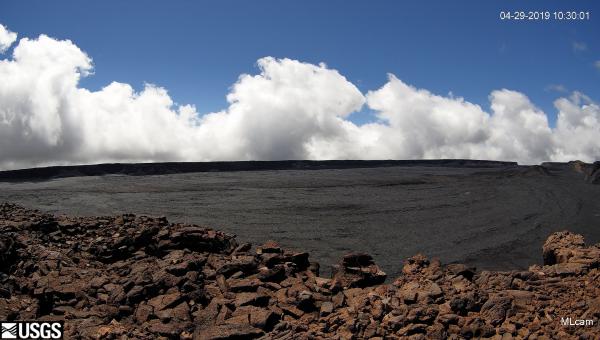 This timelapse sequence of webcam images over a 24-hour period shows a typical day at the summit of Mauna Loa. The webcam (MLcam) is located on the northeast rim of Moku‘āweoweo, Mauna Loa's summit caldera. This sequence begins in the dark, with the moon rising (white dot at left in images), then brightens as the sun rises. Clear skies in the morning shift to cloudy conditions in the afternoon, with a light snowfall creating a white dusting on the caldera floor. USGS webcam imagery, 04/29/2019.
April 24, 2019
Routine visit to Mauna Loa summit 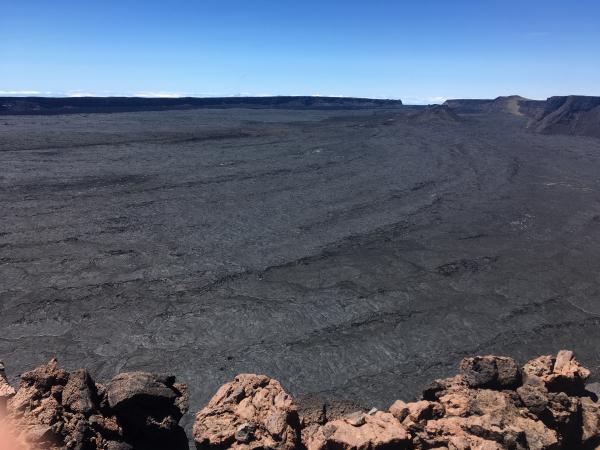 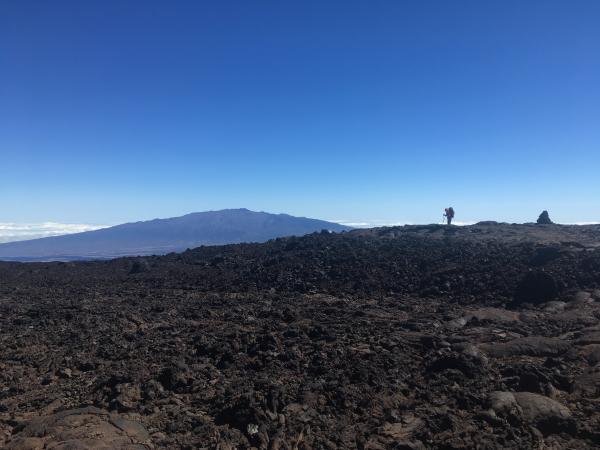 Left: HVO staff visited the summit of Mauna Loa on foot to repair the webcam on April 24. The weather was perfectly clear and views of the caldera floor showed nothing unusual. Right: An HVO geologist walks along the Mauna Loa summit trail, with Mauna Kea visible in the distant background.
April 12, 2019
HVO scientists check out monitoring instruments on Mauna Loa 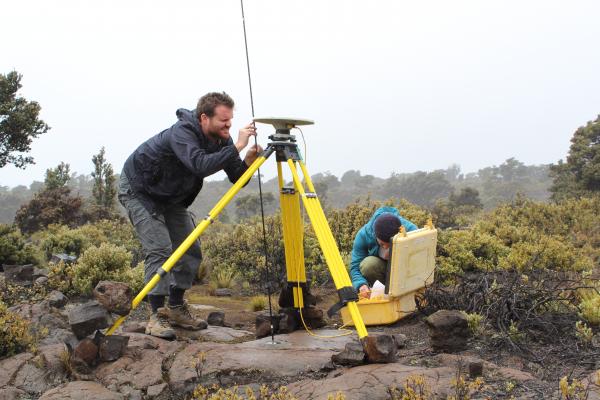 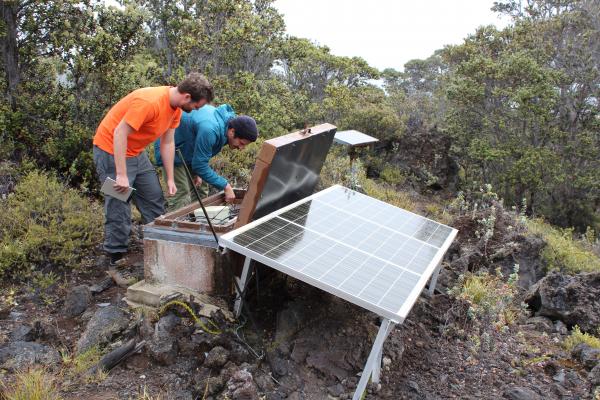 Left: HVO scientists measure a GPS instrument to ensure its stability during a multi-day deployment in the Kahuku Unit of Hawai‘i Volcanoes National Park. In recent weeks, HVO has been working to complete a GPS campaign on Mauna Loa, which involves temporary deployments of high-precision GPS receivers to collect data that will help refine models of the volcano's inflation. Permanent GPS instruments installed on Mauna Loa continuously track deformation between campaign surveys, which are conducted annually. Right: HVO scientists inspect a seismic station on Mauna Loa to evaluate for a possible equipment upgrade in the near future.
Contact Us | Accessibility | FOIA | Privacy | Policies and Notices | U.S. Department of the Interior | U.S. Geological Survey | USAGov Page modified: 2017-09-14 08:49:12