August 7, 2020
Rainbow over Halema‘uma‘u and the water lake 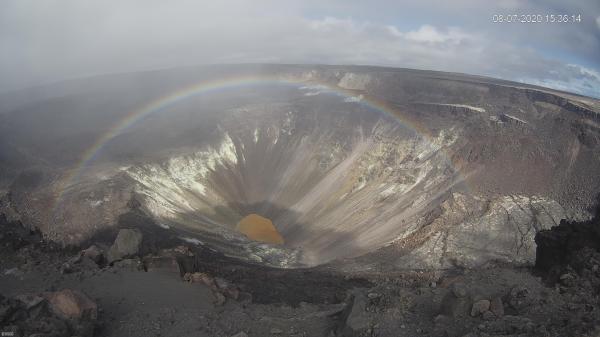 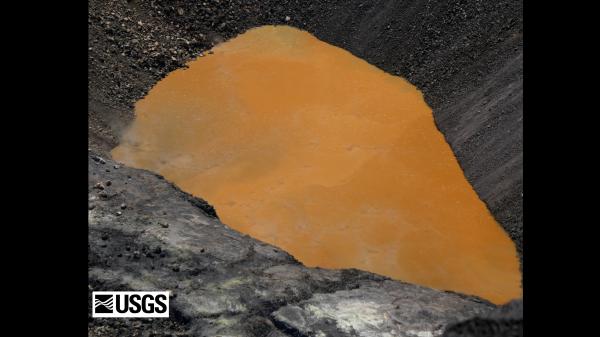 This timelapse video at Kīlauea's summit covers approximately 30 minutes and shows the dynamic nature of the water lake in Halema‘uma‘u crater. Steam from the hot water surface is constantly shifting in the winds, while the migrating color boundaries on the water surface appear to show circulation in the lake. USGS video by M. Patrick.
July 28, 2020
Continued slow rise of water in Halema‘uma‘u 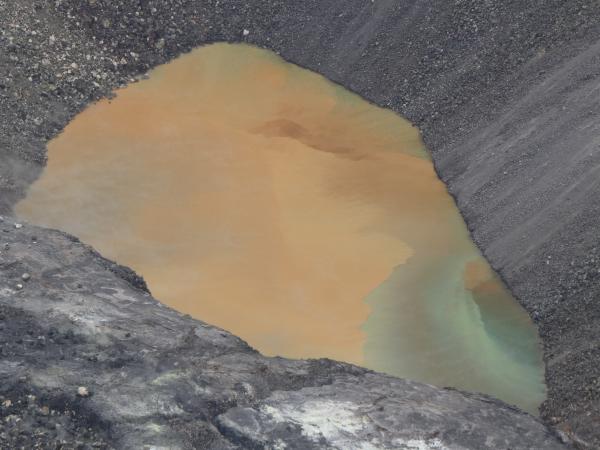 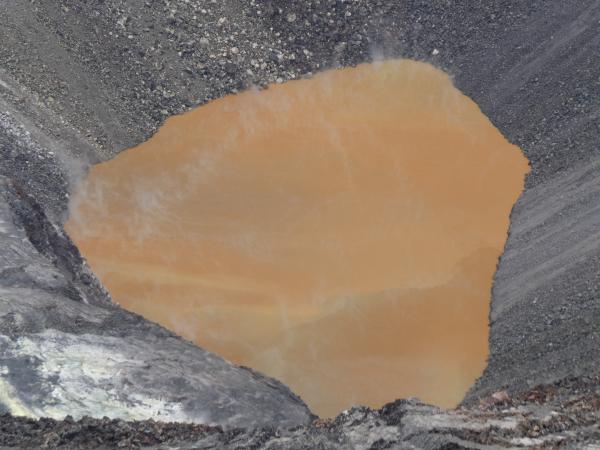 ANIMATED GIF: Saturday, July 25, marks the one year anniversary since water was first spotted at the bottom of Halema‘uma‘u, at the summit of Kīlauea. Over the past year, the summit water lake has grown to more than 270 m (885 ft) long and 131 m (430 ft) wide, with a surface area over 2.5 hectares (6 acres). The lake is over 40 m (130 ft) deep with a volume of approximately 480,000 cubic meters (125 million gallons)—equivalent to almost 200 olympic swimming pools. This animated image file (GIF) includes a series of telephoto images in a continuous loop showing the growth of the lake between August 2, 2019 and July 21, 2020, using approximately one image every 2 weeks. The apparent movement of the surrounding ground surface is not real—the shift is caused by slightly different camera angles on different days. USGS GIF by L. DeSmither.

Comparison of images showing growth of Kīlauea's summit water lake over the past year. The left image, taken on August 2, 2019, shows a small green pond that was approximately 6 ft (2 m) deep. The right image, taken on July 21, 2020, shows a lake more than 130 ft (40 m) deep with shades of tan to brown and a sharp color boundary often cutting across the lake. Hawaiian Volcano Observatory scientists continue to monitor the lake, and Kīlauea's summit. USGS photos.
July 21, 2020
No significant changes at Kīlauea's summit water lake 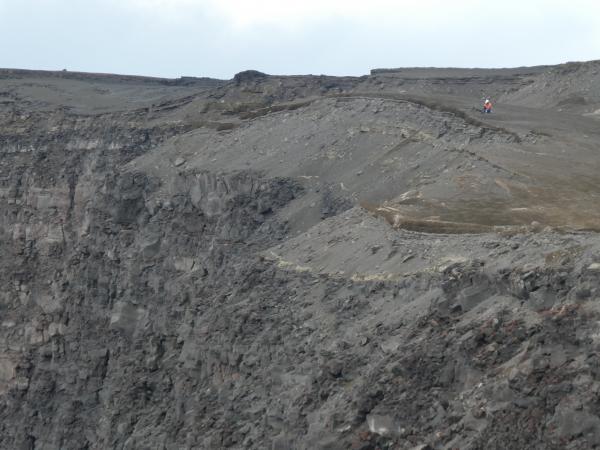 An HVO geologist collects GPS data on the western rim of Kīlauea's summit caldera. The geologist is standing upon a thick sequence of tephra deposits formed during explosive eruptions at Kīlauea's summit between about 1500 CE and the early 19th century. These layers of explosive deposits cap a much thicker sequence of lava flows (bottom and left portion of the photo), formed before 1500 CE. Research in recent years has shown that Kīlauea's summit alternates between explosive and non-explosive (lava flow dominated) periods. The tall cliff in the lower left portion of the image formed during the collapses of the caldera floor in 2018. USGS photo by M. Patrick. 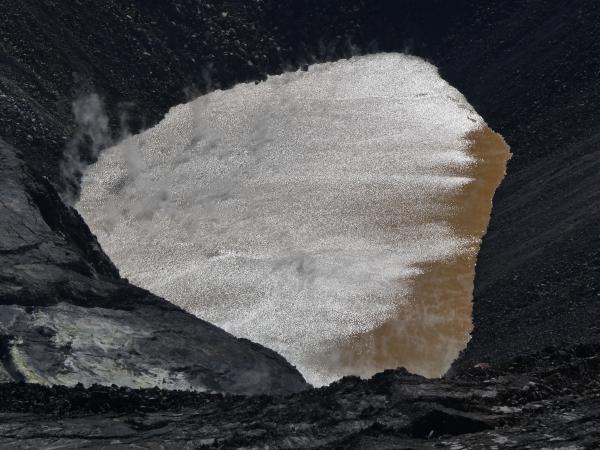 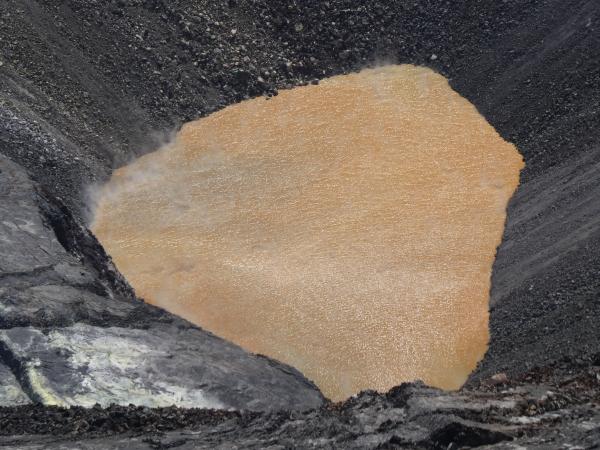 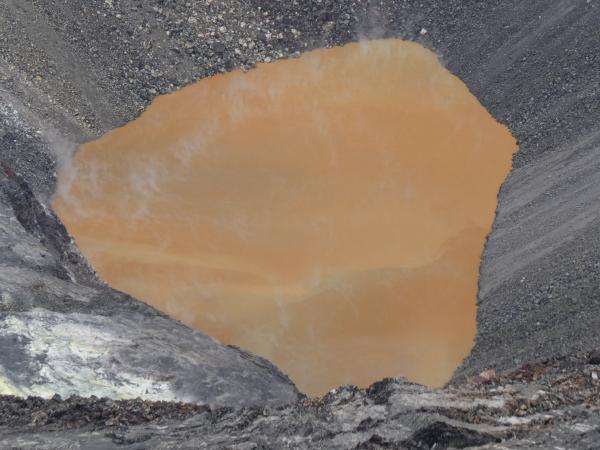 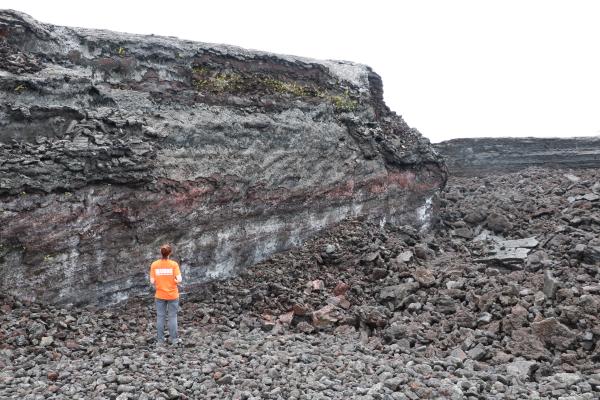 HVO geologists visited the lower East Rift Zone lava flow field this past week to make continued measurements and observations, to better understand and reconstruct the dynamics of the Fissure 8 lava flow. This photo shows the channel wall in the braided channel region of the flow. The channel wall here is about 6 m (20 feet) high, and the channel just upstream of this position is about 75 m (250 feet) wide. The large scale of the channel is a testament to the unusually high rates of flow, which exceeded 100 cubic meters (yards) per second, in the Fissure 8 channel. Note the small ferns growing on the upper channel wall. USGS photo by M. Patrick. 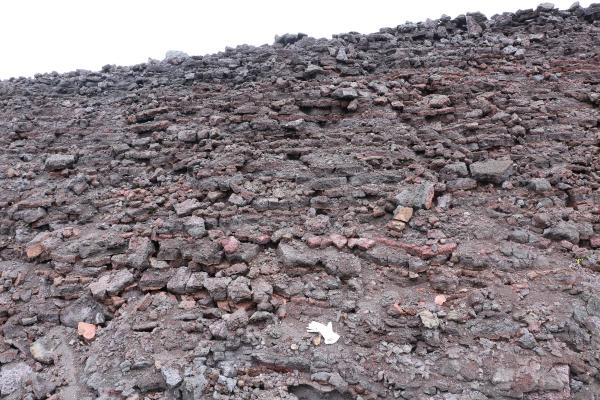 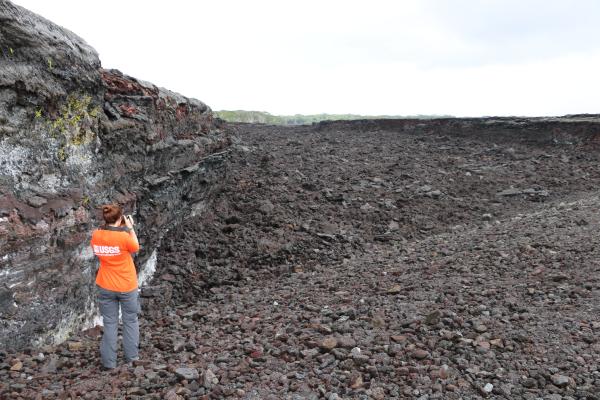 Left: This photo shows the highway roadcut exposing a cross section of the channel levee. The levee is built from many small, fluid pāhoehoe overflows spilling from the channel over the rim, shown by the thin layers here. USGS photo by M. Patrick. Right: Looking downstream along one of the two channels in this section. The channel here is about 60 m (200 feet) wide. USGS photo by M. Patrick. 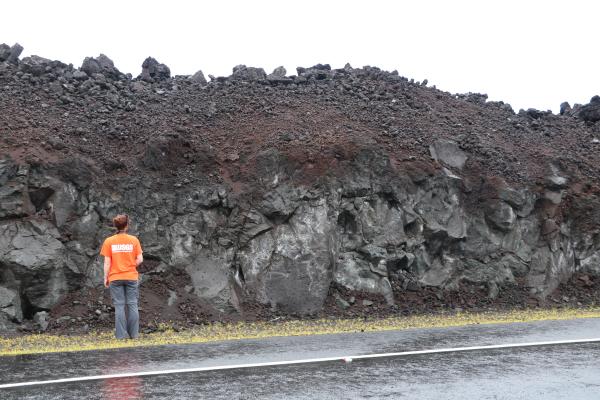 This roadcut exposes a cross section of a portion of the Fissure 8 flow that was ‘a‘ā. When ‘a‘ā flows are active, the core of the flow is fluid and moves downslope, with the rubbly clinker on the top surface carried along like a conveyor belt. This roadcut exposes the dense core that was the fluid portion, topped by the layer of rubbly clinker. USGS photo by M. Patrick.
June 30, 2020
No significant changes at Kīlauea's summit water lake 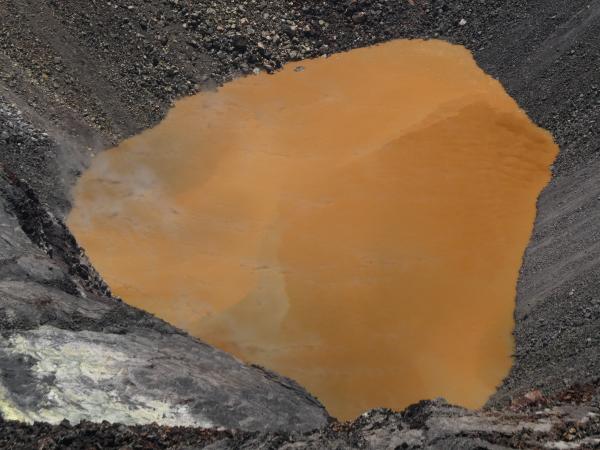 No significant changes were observed during today's visit to monitor Kīlauea's summit water lake. The lake surface exhibited some interesting color variations today, but within the range of those previously observed. The sharp color boundary between tan and brown zones has been common. Today, a wedge-shaped, slightly greenish zone was present in the west portion of the lake (towards bottom of image). Laser rangefinder measurements indicate that the lake level continues to slowly rise. USGS photo by M. Patrick. 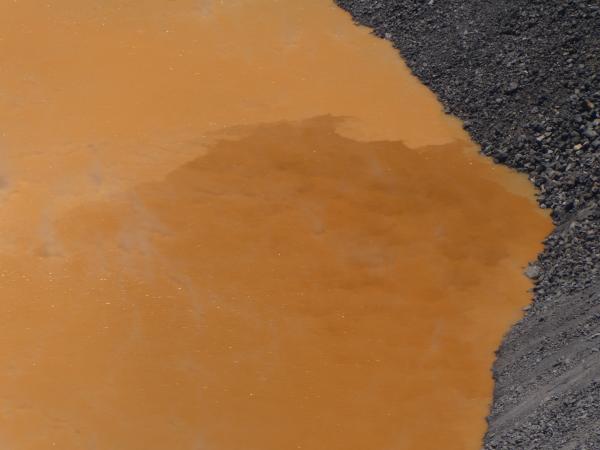 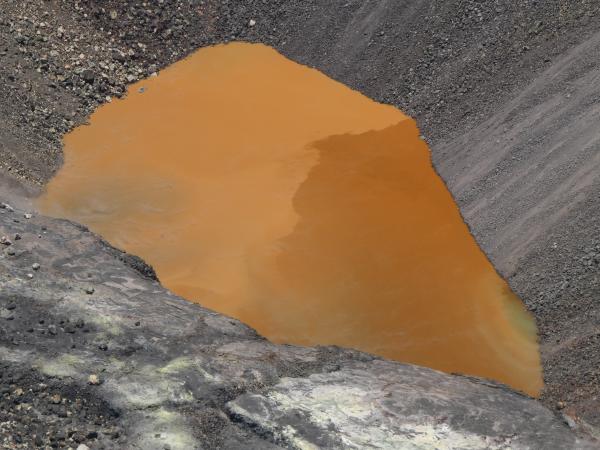 Left: In the eastern portion of Kīlauea's summit lake, the dark brown zone had a slightly mottled appearance, but this pattern was transient and gone within about ten minutes. USGS photo by M. Patrick. Right: This photo of Kīlauea's summit water lake was taken from the KWcam webcam site on the western caldera rim. The sharp color boundary between tan and dark brown zones is easily visible. A small greenish zone in the west end of the lake (bottom right of image) was more conspicuous today. These zones of greenish water correspond with areas of higher temperatures in the thermal imagery, and may represent zones of water influx into the lake. USGS photo by M. Patrick.

This panorama shows the view of Halema‘uma‘u from the northwest caldera rim, and shows much of the caldera floor that subsided during 2018. The water lake is visible at the bottom of Halema‘uma‘u. Kīlauea Iki is in the upper left portion of the photo. USGS photo by M. Patrick.
June 23, 2020
Continued slow rise of water in Halema‘uma‘u 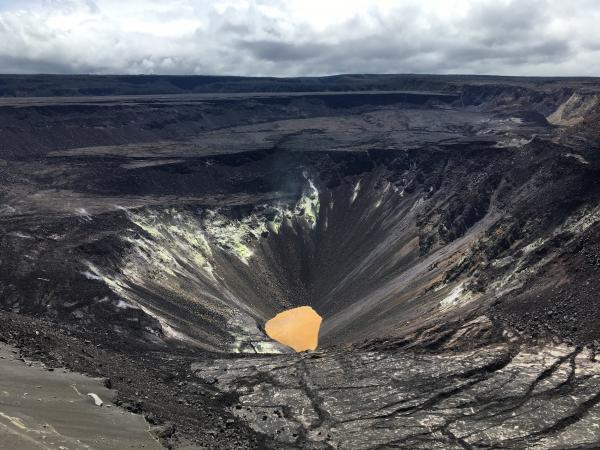 The water lake within Halema‘uma‘u crater, at the summit of Kīlauea, continues to slowly rise, with no significant changes in recent weeks. USGS photo by M. Patrick. 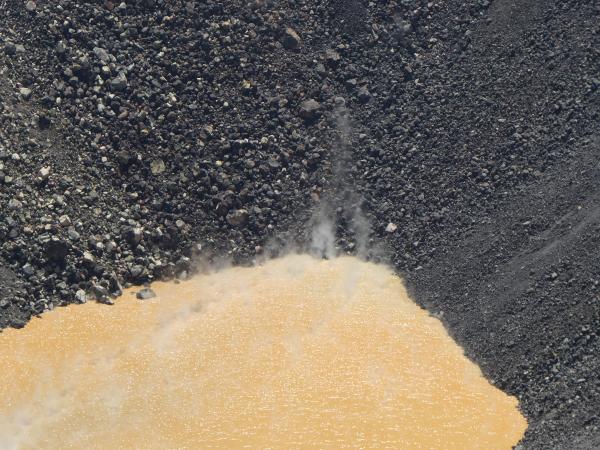 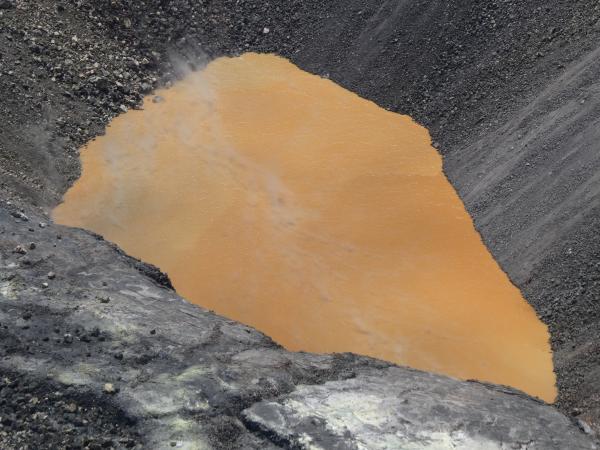 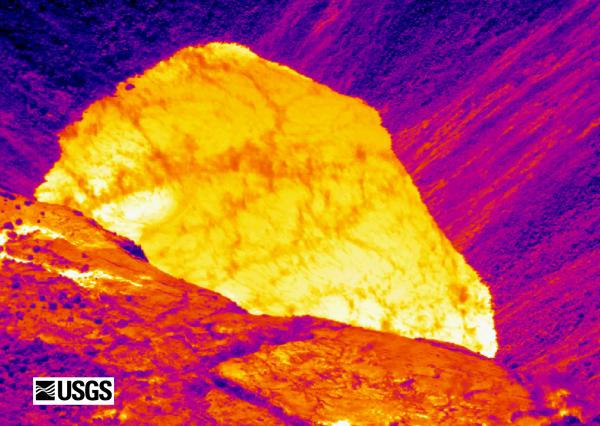 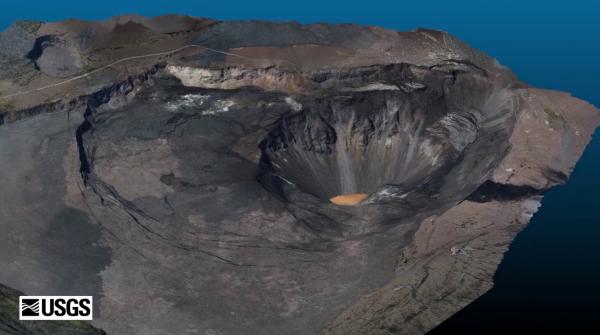 A helicopter overflight provided aerial photographs of Kīlauea caldera on May 29, and these photos were used to construct a 3D model. The water lake is visible as the tan area in the deepest portion of Halema‘uma‘u crater. For scale, the water lake is 270 m (885 ft) long and approximately 600 m (1970 ft) below the western caldera rim. USGS photos by K. Mulliken.
Video of Kīlauea summit from May 29 overflight 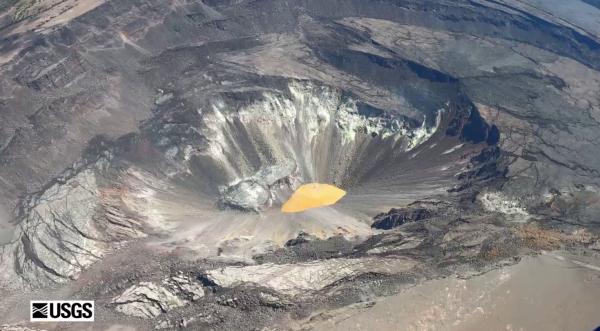 This wide-angle video was captured during a helicopter overflight on May 29, and skirts the southern border of Halema‘uma‘u crater. The water lake, filling the bottom of the crater, was tan and brown today, and showed no significant changes. USGS video by M. Patrick.
May 29, 2020
Overflight of Kīlauea's summit 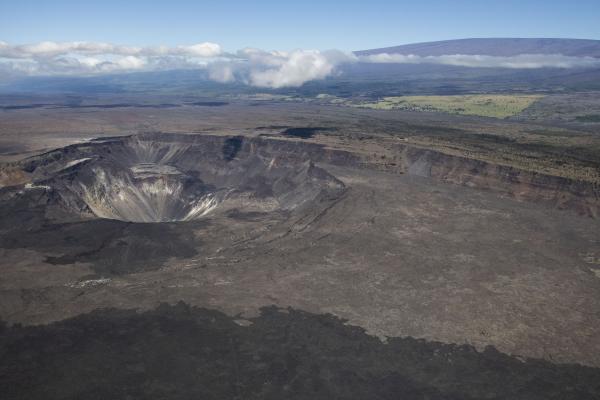 No significant changes were observed at Kīlauea's summit today, during a routine overflight by Hawaiian Volcano Observatory geologists. Nice weather allowed for clear views of Kīlauea Caldera and this photo, looking west, shows the collapse area that formed during 2018, as well as the summit of Mauna Loa in the background. Lava flows that erupted in 1971 and 1974 (darker color relative to other lava flows on Kīlauea Caldera floor) border the foreground in this image. USGS photo by K. Mulliken. 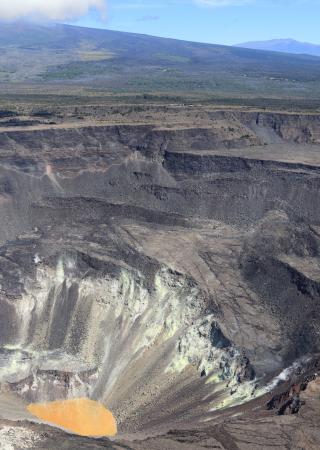 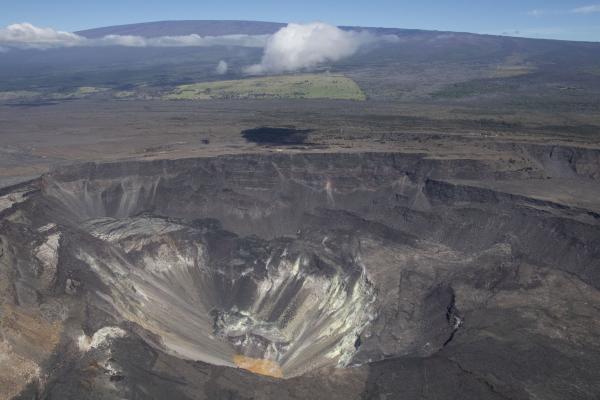 Left: This image, looking northwest from the summit of Kīlauea, shows the growing crater lake within Halema‘uma‘u, with Mauna Kea summit in the background. Kīlauea’s summit lake was rusty-brown in color today. Right: Steep walls, collapsed blocks, and rubble border Halema‘uma‘u Crater and Kīlauea's growing summit crater lake. In this photo, looking northwest, the summits of both Kīlauea (foreground) and Mauna Loa (background) are visible. USGS photos by K. Mulliken

During today's overflight of Kīlauea summit, both thermal and visual cameras were used to characterize activity. Comparing thermal (left) to visual (right) images of nearly the same view, you can see that the growing crater lake at Kīlauea's summit remains hot. Steam emanates from the lake surface in the visual image on the right, and the yellow and red colors in the thermal image indicate that the lake has a hotter surface temperature relative to the rocks and rubble around it. The lake isn't the only hot feature within Halema‘uma‘u. Fumaroles on the crater wall, which stand out as white areas indicating alteration in the visual image, have small zones of elevated temperature in the thermal image. USGS images by M. Patrick (left) and K. Mulliken (right). 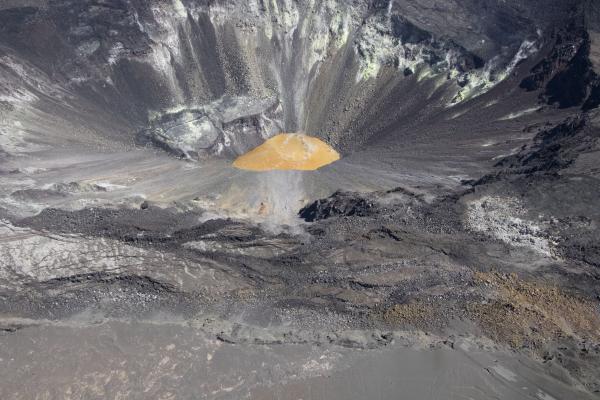 Portions of Crater Rim Drive are visible in three locations within this photo, which is looking north. Prior to 2018, Crater Rim Drive used to cross the southwest portion of Kīlauea Caldera. The collapse events of 2018 made the road impassable, as parts became severely damaged due to earthquakes, or completely collapsed. In the bottom half of this photo, fragments of the road are visible in the left center, the center of the image just below the lake, and the bottom right corner. USGS photo by K. Mulliken. 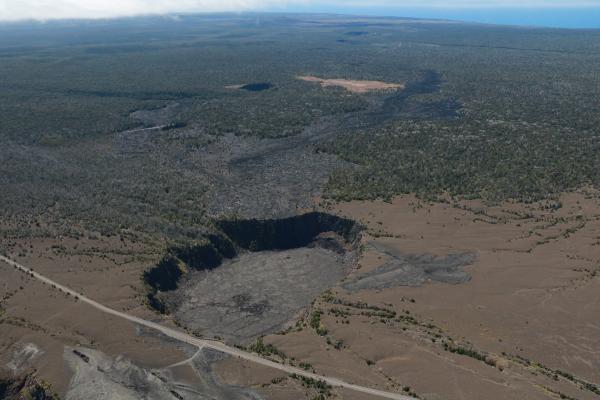 Keanakāko‘i Crater is featured prominently in the foreground of this photo, looking southeast during an overflight of Kīlauea's summit today. In 1974, fissures erupted in the vicinity of Keanakāko‘i Crater, partially filling it and feeding lava flows that traveled south. You can read more about the 1974 Kīlauea eruption in this "Volcano Watch" article: https://volcanoes.usgs.gov/observatories/hvo/hvo_volcano_watch.html?vwid=134. USGS photo by K. Mulliken. 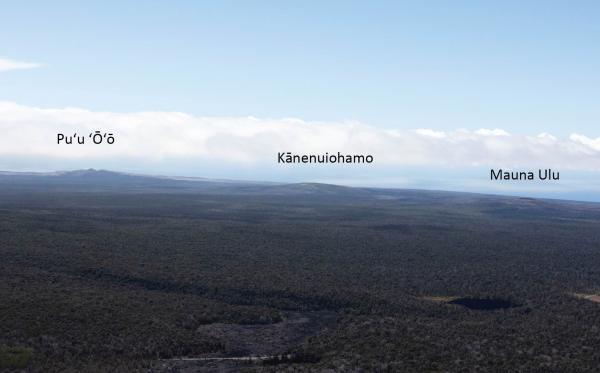 This view of Kīlauea's East Rift Zone was captured from the summit during today's overflight. Kīlauea's East Rift Zone has been the location of numerous eruptions over the past decades, some brief (days) and some longer-lived (years). In this photo, three prominent lava shields—which form during longer-lived eruptions—are visible: Mauna Ulu, Kānenuiohamo, and Pu‘u ‘Ō‘ō. Mauna Ulu was active from 1969–1974; Kānenuiohamo formed at least several hundred years ago; Pu‘u ‘Ō‘ō was active from 1983–2018.
Contact Us | Accessibility | FOIA | Privacy | Policies and Notices | U.S. Department of the Interior | U.S. Geological Survey | USAGov Page modified: 2017-09-14 08:49:12