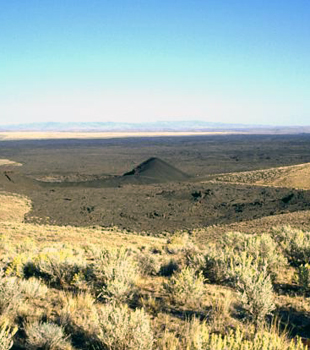 The name Jordan Craters volcanic field is applied to the Holocene basalt lava flows and their eruptive vents that lie 30 km (19 mi) northwest of the town of Jordan Valley, Oregon. The largest vent is at Coffeepot Crater, a breached crater adjacent to a remnant of its scoria cone. Other smaller spatter-cone vents are aligned to the west-southwest along a fissure extending about 0.3 km (0.2 mi). Eruptions emanating from the vents covered 68 km2 (26 mi2) with 1 km3 (0.24 mi3) with basaltic pahoehoe lava. During the eruption, the cone of Coffeepot Crater held a lava pond that occasionally broke through the confining walls to raft away of the northeastern and southeastern flanks of the cone. Lava flows spread outward, buried existing drainages, and dammed gulches to form Upper and Lower Cow Lakes on the east side of the lava field. A southeasterly lobe of tube-fed lava reached 2 km (1.2 mi) down ancestral Cow Creek before stopping.

The age of the Jordan Craters volcanic field is commonly cited as 3,200 yr, the age from a charred twig obtained during a lake-sediment coring experiment in 1986. The twig, from the contact between silt and mud of Upper Cow Lake and underlying stream gravels, presumably marks the time when lava dammed the basin, but the relationship with the lava hasn't been well established. The charcoal formation age may predate the deposition of lake sediment by some unknown amount. Thus the 3,200-yr age is best considered the oldest possible age for the flows. Older lava flows surround the Jordan Craters lava field; they range in age from 0.25 to 1.86 Ma and have volumes ranging from 0.8-1.0 km3 (0.2 – 0.25 mi3).