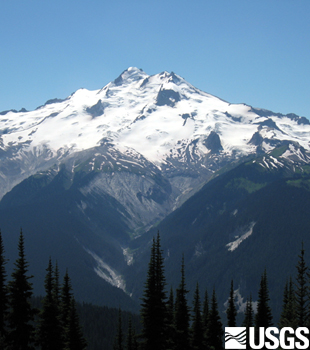 Summary
Quick Facts
Glacier Peak is the most remote of the five active volcanoes in Washington State, and more than a dozen glaciers descend its flanks, prompting its name. The peak wasn't known by settlers to be a volcano until the 1850's, when Native Americans mentioned to naturalist George Gibbs that "another smaller peak to the north of Mount Rainier once smoked." Glacier Peak is not prominently visible from any major population center, and so its attractions, as well as its hazards, tend to be overlooked. Yet since the end of the most recent ice age, this volcano has produced some of the largest and most explosive eruptions in the conterminous United States. Within this time period, it has erupted multiple times during at least six separate episodes. Glacier Peak and Mount St. Helens are the only volcanoes in Washington State that have generated very large explosive eruptions in the past 15,000 years.
Location: Washington, Snohomish County
Latitude: 48.112° N
Longitude: 121.113° W
Elevation: 3,213 (m) 10,541 (f)
Volcano type: Stratovolcano
Composition: Dacite
Most recent eruption: 1,100 years ago
Threat Potential: Very High *
Contact Us | Accessibility | FOIA | Privacy | Policies and Notices | U.S. Department of the Interior | U.S. Geological Survey | USAGov Page modified: 2015-02-02 09:01:17