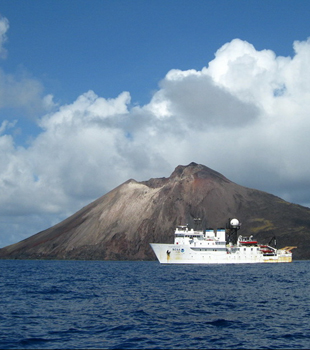 Summary
Quick Facts
The small 2-km-wide island of Farallon de Pajaros (also known as Uracas) is the northernmost and most active volcano of the Mariana Islands. Its relatively frequent historical eruptions dating back to the mid-19th century have caused the andesitic volcano to be referred to as the "Lighthouse of the western Pacific." The symmetrical, sparsely vegetated summit is the central cone within a small caldera cutting an older edifice, remnants of which are seen on the SE and southern sides near the coast. Flank fissures have fed lava flows during historical time that form platforms along the coast. Both summit and flank vents have been active during historical time. Eruptions have also been observed from nearby submarine vents, and Makhahnas seamount, which rises to within 640 m of the sea surface, lies about 10 km to the SW. From the Smithsonian Global Volcanism Program.
Location:
Latitude: 20.538° N
Longitude: 144.896° E
Elevation: 360 (m) 1,181 (f)
Volcano type: Stratovolcano
Composition: Andesite
Most recent eruption: 1967 CE
Threat Potential: Moderate *
Contact Us | Accessibility | FOIA | Privacy | Policies and Notices | U.S. Department of the Interior | U.S. Geological Survey | USAGov Page modified: 2016-02-11 06:29:05