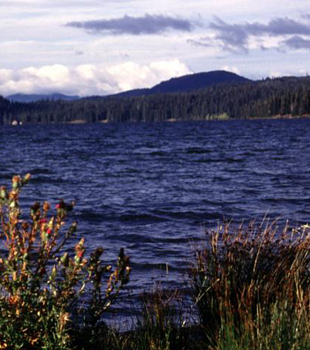 Cinnamon Butte is a basaltic scoria cone on the west flank of the High Cascades about 30 km (19 mi) north of Crater Lake. The cone marks the vent for blocky lava flows (SiO2 about 52 percent) that oozed northwest into the headwaters of the North Umpqua River. Covering about 28 km2 (11 mi2), the lava flows and cone together include only about 0.1-0.2 km3 of magma. Thus their eruptive style and volume make them characteristic for a small eruption in the Cascade Range.

What makes Cinnamon Butte notable, however, is that it is relatively young, having formed between about 7,780 and 15,000 years ago. Also, the cone and its lava flows are covered by the extensive tephra fallout and pyroclastic flow deposits from Mount Mazama (Crater Lake.) and therefore must be older than about 7,700 yr. But the Cinnamon Butte lava flows must be younger than about 15,000 years because they partly bury moraines of the last major glaciation.