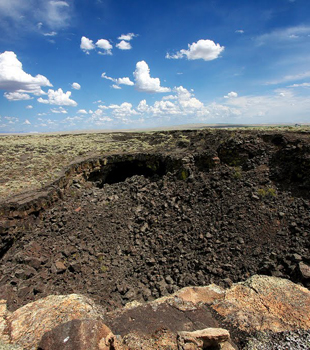 Summary
Quick Facts
The Black Butte Crater lava field (formerly known as the Shoshone lava field), located about 30 miles north of Twin Falls, Idaho, is the westernmost of the young basaltic lava fields of the Snake River Plain. Based on a single radiocarbon age, the eruption occurred about 12,000 calendar years ago as a relatively quiet effusion of basalt that produced an L-shaped lava flow 2-to-5 km (1.2-to-3 mi) in width that extends 60 km (37 mi) south and west of the vent area. The orientation of the lava field was determined by the Big Wood River valley, which was filled during the eruption, forcing the river to the western and northern margins of the lava field. The voluminous flow diverted the Big Wood and Little Wood River channels so that they now join 40 km (25 mi) west of their former confluence.

The vent at Black Butte Crater caps a lava shield that lies at the northeast end of the lava field. The vent area contains a complex lava lake that forms a 6-part, flower-petal-like depression with steep-sided walls, up to 30 m (98 ft) high; the lava lake covers an area of 2 km2 (0.8 mi2). The steepest part of the lava field hosts a lava tube and channel system, which extends 5 km (3 mi) southeast of Black Butte Crater and displays both roofed and collapsed portions. The roadside attraction of the Shoshone Ice Caves is located on this lava tube.

There is no threatening hazard from the Black Butte Crater Lava Field as it was a one-time (monogenetic) basaltic shield eruption, which will not recur. The probability of a future eruption in this region is very low. Unlike areas to the east, such as Craters of the Moon, it is not part of a well-defined, volcanic-rift-zone system in the eastern Snake River Plain.
Location: Idaho, Snake River Plain
Latitude: 43.18° N
Longitude: 114.35° W
Elevation: 1,478 (m) 4,849 (f)
Volcano type: Shield volcano
Composition: Basalt
Threat Potential: Low/Very Low *
Contact Us | Accessibility | FOIA | Privacy | Policies and Notices | U.S. Department of the Interior | U.S. Geological Survey | USAGov Page modified: 2015-02-02 08:55:11