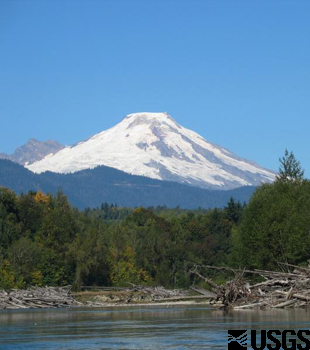 Snow and ice-covered Mount Baker, located in northern Washington, is the highest peak in the North Cascades (3,286 m or 10,781 ft) and the northernmost volcano in the conterminous United States. It is the only U.S. volcano in the Cascade Range that has been affected by both alpine and continental glaciation. The stratovolcano is composed mainly of andesite lava flows and breccias and was largely formed prior to the most recent major glaciation (Fraser Glaciation), which occurred between about 25,000 and 10,000 years ago.

The most recent major eruption of Mount Baker, about 6,700 years ago, began with flank collapse events that resulted in lahars that moved down the Middle Fork and Nooksack Rivers as well as down the east flank (damming Baker River and creating Baker Lake) and ended with a widespread tephra fall. In 1975-76, Sherman Crater, immediately south of the summit, exhibited signs of renewed volcanic activity as a result of magma intruding into the volcano but not erupting. This activity resulted in monitoring that was more intense than previously applied at any other Cascade Range volcano and produced important baseline data against which recent research has been compared. Sherman Crater has been the site of increased steam emission since 1975.

Although monitoring was increased as a result to the 1975-76 activity, much of it has been dismantled and monitoring at Mount Baker is now insufficient due to the threat that renewed activity would pose to nearby communities and regional infrastructure. Mount Baker is one of several Cascade volcanoes that are high priority to have their monitoring systems enhanced in the coming years.