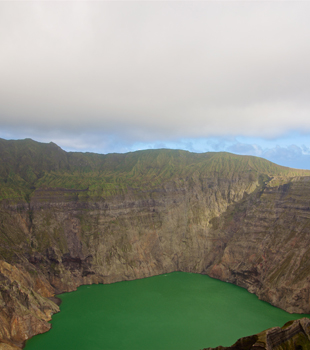 Summary
Quick Facts
The elongate, 9-km-long island of Anatahan in the central Mariana Islands consists of large stratovolcano with a 2.3 x 5 km, E-W-trending compound summit caldera. The larger western portion of the caldera is 2.3 x 3 km wide, and its western rim forms the island's 790-m high point. Ponded lava flows overlain by pyroclastic deposits fill the floor of the western caldera, whose SW side is cut by a fresh-looking smaller crater. The 2-km-wide eastern portion of the caldera contained a steep-walled inner crater whose floor prior to the 2003 eruption was only 68 m above sea level. A submarine volcano, NE Anatahan, rises to within 460 m of the sea surface on the NE flank of the volcano, and numerous other submarine vents are found on the NE-to-SE flanks. Sparseness of vegetation on the most recent lava flows on Anatahan had indicated that they were of Holocene age, but the first historical eruption of Anatahan did not occur until May 2003, when a large explosive eruption took place forming a new crater inside the eastern caldera. From the Smithsonian Global Volcanism Program.
Location:
Latitude: 16.35° N
Longitude: 145.67° E
Elevation: 790 (m) 2,592 (f)
Volcano type: Stratovolcano
Composition: Basalt - Dacite
Most recent eruption: 2008 CE
Threat Potential: Moderate *
Contact Us | Accessibility | FOIA | Privacy | Policies and Notices | U.S. Department of the Interior | U.S. Geological Survey | USAGov Page modified: 2016-02-11 06:27:37