The Global Positioning System (GPS) consists of a group of Earth-orbiting satellites that orbit the Earth twice per day at an altitude of about 20,000 km (12,500 mi) and continuously transmit information to receivers on the ground. Using these data, it is possible to calculate the exact position of the receiver on Earth at a specific point in time.

To use GPS data for volcano monitoring, multiple receivers are placed around a volcano as a GPS network. In some locations, instruments are permanently installed and record data continuously. However, sometimes scientists setup a "campaign" GPS network above "benchmarks" (sites with a standard point of reference) where they are left for several days to record data. Campaign-style data are often recorded from the same benchmark sites annually or as needed to detect changes in volcano behavior.

By looking at data from a single receiver over a period of time, scientists can determine whether the ground surface has moved (deformed). By combining the data collected from a GPS network, it is possible to get a larger view of which areas of the volcano's surface are moving as well as the speed and direction of movement. This large-scale picture of volcano deformation can be used to construct a model of what is happening beneath the surface—for example, the location of any magma reservoirs or active faults.

GPS data is accurate to within a fraction of an inch. 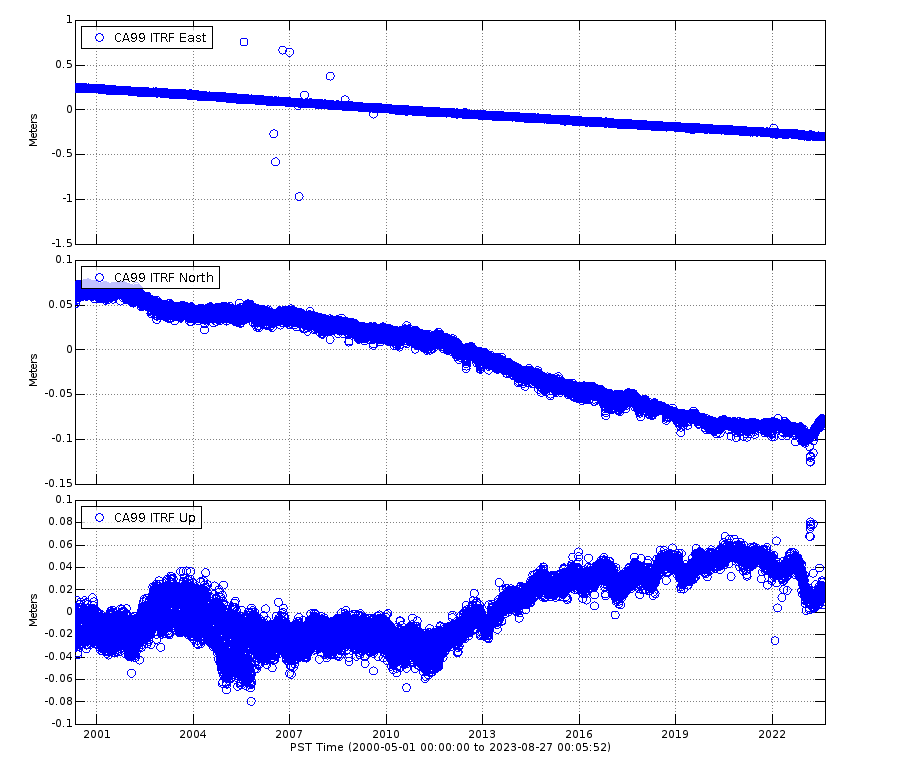 Relatively inexpensive GPS receivers, like those in vehicle navigation systems, smart phones, and handheld units, can determine their position on the Earth's surface to within a few meters. With more sophisticated receivers and data-analysis techniques, receiver positions can be determined to less than a centimeter (fraction of an inch), which is very important when applied as a volcano monitoring technique. Networks of GPS sensors can track three-dimensional movements of the ground surface even at rates of less than 1 millimeter (1/25 inch) per year.

GPS is the name of the satellite navigation system created and maintained by the United States. Other countries have launched their own satellite navigation systems, including GLONASS (by Russia) and Galileo (by Europe), but all follow the same basic principles as GPS. We generically refer to these systems collectively as GNSS (Global Navigation Satellite System). Modern receivers can record data from multiple types of GNSS satellites, which increases the overall accuracy of the calculated positions.