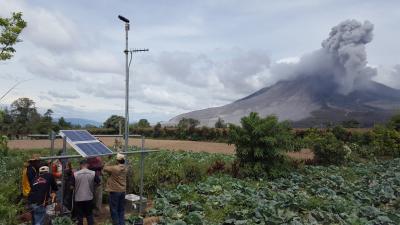 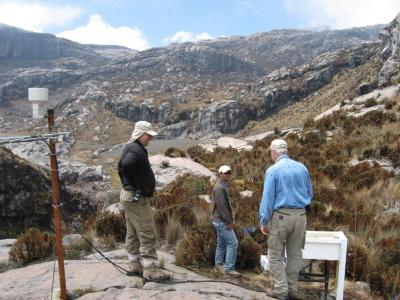 USGS and INGEOMINAS colleagues at an lahar-detection (Acoustic Flow Monitor or AFM) station on the west flank of Nevado del Ruiz, Colombia. View is up the glacial valley toward the summit area.

To support worldwide volcano monitoring efforts, VDAP engineers assemble robust instruments that are simple to install, easy to maintain, and last for many years. Seismic and Global Positioning System (GPS) stations are positioned to detect and locate subtle earthquakes and ground movements that may signal an awakening volcano; they are designed to run on solar energy and relay their data in real time through low-power radios. Field engineers from partner agencies learn how to install and maintain the systems either at home on their volcanoes, or during a visit to Vancouver, Washington. With experience, they can independently install their own stations and assist neighboring countries, enhancing VDAPs secondary goal of science diplomacy.

VDAP has developed new systems to better and more frequently quantify the amounts and types of gas emitted from volcanoes, which are key indicators used to forecast volcano behavior. In the past, volcano scientists have had to make measurements in unsafe locations or fly through the volcanic plume in expensive helicopters or small aircraft. Today, VDAP scientists and engineers deploy scanning ultraviolet spectrometers to measure the volcanic output of sulfur dioxide, a key indicator of underground magma. They also designed robust gas "sniffers" (called MultiGAS) to determine the ratio of sulfur dioxide to other key gases such as carbon dioxide, which reveals magma depth and the pathways by which gas reaches the surface. Both technologies can send data directly to the volcano observatory, without the need for frequent servicing of the instruments.