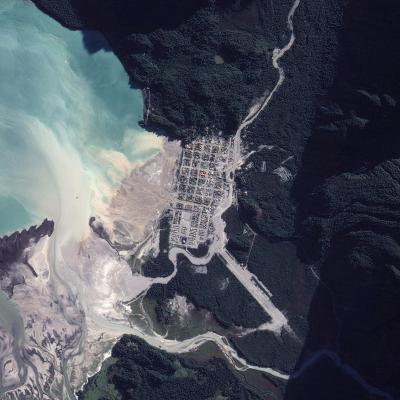 Heavy rains in May 2008 remobilized ash laid down by the eruption of Volcan Chaitén, in southern Chile. Although evacuated, this rendered much of the town of Chaitén (visible in photo) uninhabitable. 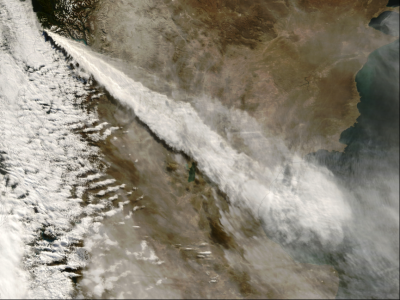 Satellite image of the ash dispersal from the 2008 Chaitén eruption. Ash plume reaching the Atlantic Ocean after going over Argentina

On May 2, 2008, Chile's Chaitén volcano erupted with an ash column that rose to about 17 km (10 mi) and lasted for 6 hours. Eruptive activity continued from May 2nd to May 8th with nearly continuous ash emission and intermittent large explosions. Chile's SERNAGEOMIN (Servicio Nacional de Geología y Minería) and ONEMI (Oficina Nacional de Emergencia del Ministerio del Interior) successfully evacuated about 5,000 people from Chaitén town before May 5th when sediment was remobilized by intense rainfall and roughly 80% of the town was damaged. Sediment from flood waters buried buildings up to 1.5 m (5 ft). There was extensive damage to the airport & marine facilities.

On May 8, a VDAP team was requested to help SERNAGEOMIN install a real-time seismic monitoring network at this previously unmonitored volcano. One week later, the team of USGS scientists and 15 trunks of gear were in Chile. On multiple occasions during the eruption ash disrupted air traffic in South America. Two experts on volcanic ash hazards to aviation from the USGS Volcano Hazards Program traveled to Argentina and Chile to advise civilian and military aviation interests on safe operations while the volcano was creating conditions hazardous to flight safety.

In addition to assistance with monitoring instrument installation, VDAP provided funding for an international research effort to understand the history of the volcano and the effects of the eruption on the nearby environment, and advised the government of Chile on a new national strategy to reduce risk from volcanic eruptions. The close work with VDAP scientists spurred the Chilean government to complete of a hazard assessment for Chaitén and develop a plan to address nationwide volcanic hazards.